Even though it is completely duplicative to write about this, I feel somewhat obligated to the extent that this blog claims to ‘monitor’ Russia…so, here goes:

Today, President Putin accepted the resignation of Prime Minister Mikhail Fradkov and appointed Sergei Ivanov Viktor Zubkov, the head of the Federal Financial Monitoring Service, as his successor. A lot of analysis has been hastily prepared to try and explain this unexpected event. Ironically, many of these analyses attem 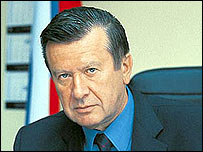 pt to fit this occurrence within the same narratives that failed to predict or even foreshadow today’s events. For example:

Radio Free Europe: “The murky politics of Vladimir Putin’s Kremlin became even more opaque today as the Russian president named an obscure official, Viktor Zubkov, as prime minister.” If your argument is that ‘politics is murky’ (which it is everywhere, btw), then any unforeseen event supports your view. And, in fact, I would argue that it was not so ‘murky’. The resignation of Fradkov was clearly planned ahead of time and Putin mentioned that a new PM needs to take over during the elections. Thus, far from being murky, the appointment of an unknown suggests Zubkov is a placeholder until the end of the Presidential elections. On a side note, RFE had an earlier article entitled, “Fradkov Departure Likely to Clear Stage for Ivanov.” The cached version of the article still comes up in a Google search, but if you click on the RFE link, you are taken to an error page that states, “This article is no longer valid…” No longer valid indeed.

Time Magazine: “Zubkov has been installed in the job that makes him Putin’s heir apparent.” If Ivanov was appointed, like they all were reporting was going to happen, then this might make sense. But doesn’t the fact that Putin deliberately chose someone completely unknown to run the government during the election campaign signify that this is not the ‘heir apparent’. This is the ‘Putin will do what Yeltsin did’ narrative. But even a cursory comparison of Yeltsin and Putin’s presidencies reveals how different they are. While it may be true that Putin wants to instill a degree of predictability in the political system, I would argue that he does not conceive of predictability in this way. Lastly, Zubkov is 66 years old, which in Russian years is around 100. There is no way he is a contender for the Presidency! In fact, Putin may have chosen him simply because he is so old, Russians will draw this conclusion on their own, despite Time Magazine’s piercing analysis to the contrary.

The Washington Post: Peter Finn over at the Post perpetuated the idea of Zubkov as the ‘successor as placeholder until Putin’s 2012 return’. Once Western papers finally realized that Putin will in fact step down (‘as the constitution requires’), they quickly developed a different scenario that allowed them to retain their Putin = Satan narrative. I find this highly unpersuasive because it is contrary to everything Putin has said and done over the past eight years.

And here is some propaganda coverage from the Russian perspective:

The contest is probably still between Medvedev and Ivanov. Russian sources also share this view. Furthermore, as I have argued before, Putin may in fact not choose a ‘successor’ and thereby encourage an actual *gasp* political campaign. Hence all the concern with building a two-party system, which is meaningless in a one-man race. In other words, the development of Russian politics over the next few years is still all about the parties and not about individuals.