The Changing Face of Western Involvement in Russia 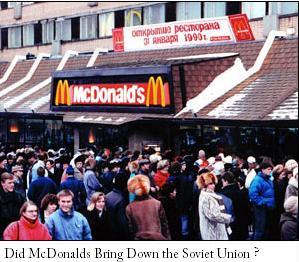 Over the past few years, Western NGOs in Russia have come under increasing pressure to, essentially, go home. It has been almost two years since the spy rock scandal that led to accusations by Moscow that members of the British embassy were involved in spying and were using NGOs to that end. More recently, Moscow proposed a think tank for freedom and democracy to be set up in Europe and run by Russians. In seeming contradiction to this hostility toward foreigners is the surging growth of foreign direct investment in the country. The growth of business activity in Russia has in turn led to a high demand for Western professionals in the investment and legal fields. A recent article on Law.com quoted the head of Freshfields Bruckhaus Deringer‘s Moscow office as saying that the demand for Western lawyers is so high that “I don’t even need them to speak Russian.” Most important, is that this influx of Western capital and talent fundamentally differs from the 1990s, “when Harvard M.B.A.s flooded Russia, preaching Western-style democracy and capitalism, only to let a small cabal of criminals bleed the country dry” (Time Magazine’s words, not mine). Indeed, this time not only has the relative bargaining power of each side shifted, but the intentions of the Westerners have changed. So are we witnessing a shift in Western non-governmental involvement in Russia? And, if so, what does it say about the relative merits of each approach?

I think we are witnessing a major break from the 1990s-era approach to Russia as the defeated former enemy. At that time, it probably made sense to flood the country with ‘experts’ to ‘fix’ the Russians. Americans especially probably saw parallels between post-Cold War Russia and post-WWII Germany and, to a lesser extent, Japan. Even casual observers of American politics know that false historical analogies between WWII and, well, everything often inform the absolute worst policy decisions. In this case, we gave Russia a Marshall Plan without the money, similar to how we gave Iraq a liberation and occupation without the army. Finally, the innumerable NGOs (often funded by the US government) that proliferated Moscow have seemed to accomplish nothing with their endless ‘trainings’ and ’roundtables’ aside from scaring paranoid FSB colonels. Anyone who has worked inside these organizations would be struck by the high turnover rate of staff, lack of a guiding mission, and absolutely no method [perhaps deliberately] of measuring the success of their efforts. Even more surprising is that these organizations – tasked with trying to sell Western values and institutions to Russians – are usually led by ex-Cold Warriors and staffed by virulent Russophobes.

Now we turn to the new brand of Westerners entering Russia. Regardless of their opinions about Russia and Russians, we know that this is irrelevant to their motivations. They are there to make money and deals, not to re-make a country. They hope to navigate a different and challenging political and cultural environment, not fashion it after their own. Critics will say that this amounts to surrender and failure. I would argue, however, that the new Westerners will be more successful at achieving the stated goals of their predecessors. Ultimately, Russia needs foreign investment to sustain economic growth and develop new sectors of the economy, and its leadership is aware of this. Thus, down the line, Russia will either bring its institutions and laws into line with Western standards or suffer the consequences.

It has been said that the road to hell is paved with good intentions. We should stop trying to replicate our ‘miracle’ in Russia through the annoyingly impotent use of ‘soft power.’ Instead we should rely on the most American of institutions to do our work for us – the free market.