A Suggestion for President-elect Obama 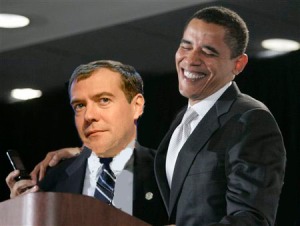 For those of you who haven’t been to President-elect Obama’s transition website yet, it includes a feature that allows ordinary citizens – or at least those with internet access – to submit their ideas on any policy issue. I’m curious as to what % of submissions are not ‘spam’ and, even more, who exactly is responsible for retrieving, sorting, and reading[?] all of the submissions. And even though I’m skeptical about the use of the internet as a tool of co-option in the guise of inclusion, I decided to go ahead, drink the Kool-Aid, and submit my idea. Naturally, I chose to address US-Russian relations – not only am I passionate about this issue, but I assume it is less commonly addressed than, say, the financial crisis, and thus increases my chance of being read by some intern half my age. Here is what I wrote:

President-elect Obama should schedule a summit with Russian President Dmitry Medvedev right now, that will take place during Obama’s first six months in office. The summit should primarily address arms control issues (e.g., START renewal), but also should be comprehensive and address issues related to economics (e.g., WTO, foreign investment), energy security (e.g., ‘pipeline wars‘), near-abroad issues (e.g., Georgia, Ukraine, and NATO expansion), and strategic stability (e.g., BMD). The summit should be scheduled now, should occur in the first half of next year, and should be comprehensive for several reasons:

1. Changes to Russia’s Constitution – the Russian Duma recently extended the presidential term from 4 to 6 years, and there are rumors that early elections will put PM Putin back into the presidency. This would almost certainly stifle Russia’s social, economic, and political development, and would postpone necessary reforms in favor of an indefinite ‘crisis manager’ President Putin. If a summit is scheduled with Pres. Medvedev, and preparations are under way, Russian political elites would be wary of ejecting him for fear of spoiling relations with an Obama Administration before they even start.

2. Oil Prices – if the price of oil is lower than the Russian government budgeted for next year (<$70/barrel), then Russia's capabilities will be more constrained, and better bilateral and multilateral relations will look much more attractive. This, however, should not be a subject of the talks, merely the context. Furthermore, even if Russia's economy is considerably weakened by low oil demand, the U.S. should respect Russia's interests and recognize that taking advantage of temporary weaknesses is a recipe for future problems.

3. Financial Crisis – Russia’s leaders blame the U.S. for the crisis, and, to some extent, they are right. Still, nobody forced their firms to take Western loans and become overleveraged. President-elect Obama can use the financial crisis as a point around which he can pivot to other issues. For example, he could recognize the U.S.’s role in the crisis, and argue in favor of strengthening global economic ties to avoid another crisis and foster mutual economic benefits. In the case of Russia, this means joining the WTO and perhaps concluding a Bilateral Investment Treaty (BIT) with the U.S. With regards to the BIT, President-elect Obama could point out that while foreign portfolio investment and foreign lending in Russia have severely dropped off during the current crisis, foreign direct investment has not seen as dramatic a fall, and in fact American companies are still opening factories in Russia (even if they’re bankrupty!).

4. Strategic Stability – the Bush-Putin era saw the demise of two arms agreements (ABM and CFE), and one seriously threatened (INF). Furthermore, the only new arms control agreement signed during Bush-Putin (SORT) has no verification provisions, but rather relies on those in START, which expires in 2009. If START expires, it would be disastrous for strategic stability and US-Russian relations, especially in the context of NATO expansion, a possible BMD deployment, and Russia’s conflict with Georgia. President-elect Obama could finally recognize that Russia is not completely wrong (or crazy) for opposing missile defense and NATO expansion, but reaffirm that Russia does not have veto power over what alliances independent countries join. On BMD, it simply isn’t sufficient to tell the Russians that their understanding of their own national security is completely flawed – this has been the same line used since Reagan and Gorbachev first discussed SDI in Geneva in 1985. Obama could also offer to mediate a reconciliation between Russia and Georgia, which will have to occur at some point or another anyway. Also, with Iran steadily moving toward becoming a nuclear state, the United States and Russia need to act quickly and put forward a joint proposal on how to respond, especially as the risk of a unilateral Israeli air strike increases. If the U.S. and Russia signed onto a plan, it would almost guarantee its adoption by other actors and/or the UN Security Council.

5. Package Deal – the talks should be comprehensive in order to increase the likelihood of breakthroughs and bargains. With more issues on the table, each side will be forced to prioritize and accommodate the other, rather than taking opposite positions on a case-by-case basis, which usually fails. Even if the negotiations do not yield any binding agreements, it would still be an invaluable learning experience to gauge Russia’s interests and willingness to negotiate.

In sum, President-elect Obama needs to act swiftly, deliberately, and intelligently to begin repairing our relations with Russia. An ambitious early Obama-Medvedev Summit that focuses on strategic stability, but also tackles all of the sore points of the US-Russian relationship, could put us back on the right track. Furthermore, a successful summit could yield a renewed US-Russian partnership, which would immediately make many of the United States’ foreign policy burdens less challenging. The US-Russian Strategic Framework Declaration of 2008 is an acceptable starting-point, but the two sides need to move beyond expressing vague positions and begin making concrete agreements.

1 Response to A Suggestion for President-elect Obama