There are probably numerous reasons why Medvedev is so keen on going after corruption right now. I do not doubt that he genuinely cares about this subject, as he has been talking about it for a long time and also his academic legal mind probably rejects the vory v zakone-like patterns of relationships and behavior that is more common among the older elites. But, I also think that Medvedev’s anti-corruption campaign serves a more personal, political, interest as well.

Medvedev wants to use the campaign to develop his own independent base of power. One example from history – a young, new, relatively unknown Russian President Putin, nearing his one-year anniversary on the job, made some moves to replace unsupportive governors with his guys for the gubernatorial elections. Elena Panfilova, the head of Transparency International in Russia, said in an interview last year that Medvedev could use his anti-corruption campaign to build a source of power:

Similarly, Medvedev is now testing the waters for what could turn out to be a major bureaucratic shake-up down the road – specifically to eliminate certain siloviki and others who have deposited themselves in some of Russia’s most powerful positions and most valuable firms. Going after Rostekhnadzor’s mid-level managers – seriously, these are guys who are dirt poor and have no meaningful political affiliations – is clearly not Medvedev’s final objective, both for himself and for the anti-corruption campaign, but it is a good start.

Here, it is necessary to point out that the cases against the Rostekhnadzor employees were brought by Deputy Prosecutor Aleksandr Vladimirovich Gutsan, who works under Prosecutor General Yury Chaika. Last March, Gutsan was called out by Kommersant over some public comments he made that were, ahem, ‘disrespectful’ of private property during a discussion on the fight against drug trafficking in Russia (quote: “It is necessary to pass laws at the federal level, which at the very least permit the confiscation of property, when the legality of the acquisition of that 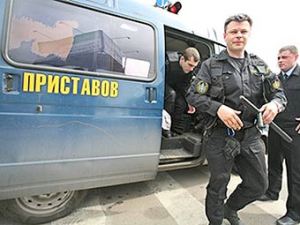 property is not affirmed within the established framework.”). Overall, he just sounds like a typical overzealous prosecutor who probably talks too much. But, as will be seen below, this mindset is actually relevant to the broader context here.

Specifically, Gutsan was installed in the Prosecutor position in April 2007 by then-Pres. Putin, after having worked at the Federal Bailiff’s Service of the Russian Federation [Федеральная Служба Судебных Пристатов]. Gutsan is an old friend of Pres. Medvedev, and they both graduated from Leningrad University Law School in 1987 (the ‘A.A. Zhdanova’ class). The current Director of the Federal Bailiff’s Service (FBS) is Artur Olegovich Parfenchikov, also from the 1987 ‘A.A. Zhdanova’ class of Leningrad University law and friends with Medvedev and Gutsan. Parfenchikov was appointed to that post late last year by Medvedev. It is at this intersection of three old friends, all holding various state positions, that you can get a sense of what Medvedev’s strategy might look like.

The FBS is actually a remnant of an institution that arose in the feudal Novgorod Republic. Its primary function, both then and now, is to enforce the rulings of local courts. That’s right – if you win a court judgment in Russia, you have no right to try and collect the damages that are legally yours. Instead, you have to coordinate with (i.e., wait for) the FBS, as only bailiffs are legally entitled to collect judgments. As you can guess, this system has inspired annoyance over its inefficiency and suspicion over its status (See this report for example).

Over the past few years, the FBS’ powers have grown significantly. First, in October 2007, Federal Law No. 229-FZ, “On Enforcement Proceedings,” included many significant reforms. For example, the law gave the FBS the power to prevent debtors from leaving the country, to allow for a search and seizure of a debtor’s bank records when the debtor’s bank details are unknown, and to search debtors’ houses and businesses when when they are not home. Also, it expanded the list of property that may be seized to satisfy a judgment to include accounts receivable, property leases, and certain intellectual property rights. Also, just last month, Pres. Medvedev signed Federal Law No. 38-FZ of March 14, 2009, which expanded the authority of the FBS to initiate preliminary investigations. Previously, only the national or regional heads could initiate such an investigation – now, any member of the FBS can.

The FBS has also grown in both size and aggressiveness over the past few years. In 2009, the number of FBS officers is projected to grow by 20k to 85,000 total members. And late last year, the FBS got some attention after it was reported that it was cooperating with the Federal Border Guard Service to prevent foreign debtors from leaving the country, pursuant to the new 2008 law. Furthermore, there is no materiality requirement, such that any court ruling that an individual owes money is sufficient for barring him from leaving the country.

Finally, there are indications that the FBS will seek to enhance its power even more. First, there have been recent news reports that the FBS might be given surveillance powers – operativno-razysknaya deyatelnost (ORD) – under a law being drafted within the Ministry of Justice. And this year, the head of FBS Parfenchikov was quoted as advocating the redesignation of the FBS as a law enforcement body.

Some may ask, “so what?” There is a financial crisis, after all, and that means more debtors and thus more debt-collectors. The answer, I think, lies in a different question – how will Medvedev use the anti-corruption fight to build his own source of power? I will speculate on these questions in part III.