The War Against Corruption Part III – Dima Builds a Krysha 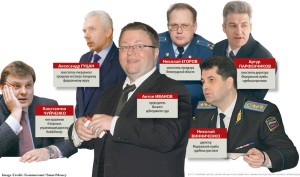 In my previous two posts, I suggested that the ‘war on corruption’ might actually ‘real’, at least by Russian standards, as it will supply Medvedev with the necessary pretext to consolidate his power. Furthermore, Medvedev needs some means – typically a branch of the bureaucratic apparatus – of establishing his power. In my second post, I offered up the Federal Bailiffs Service (Федеральная Служба Судебных Пристав) as one possible instrument for this task. Medvedev is old friends with the head of the FBS – Artur Parfenchenko – who was appointed to that position by Putin. Also, the Deputy Attorney General who initiated the investigation of Rostekhnadzor is Aleksandr Gutsan, also a classmate of Medvedev and Parfenchenko and a former member of the Federal Bailiff’s Service until Putin appointed him to his current post. And this is in the context of the FBS receiving more funding and growing in both size and jurisdiction. What’s more, there is a precedent for the use of the FBS in this way.

In 2001, the FBS was used by the Kremlin/Gazprom to prevent Most-Media (owned by now-exiled oligarch Gusinsky) from selling a 19% stake in NTV to foreign investors, namely George Soros and Ted Turner. The FBS was able to prevent the sale by ‘arresting’ the 19% shares – something authorized by the arbitrazh court judge – and taking away the voting rights associated with the 19% shares – something not authorized by the arbitrazh judge. About a year later, just as the journalists from NTV settled into their new jobs at rival independent station TV-6 (owned by Berezovsky), the bailiffs service intervened and shut down the station. Finally, the FBS also played a significant role in the acquisition/expropriation of many business concerns within the Khodorkovsky empire. Thus, we see that the FBS was instrumental in disempowering the oligarchs that had essentially ruled Russia like a group of mob bosses since independence. This step, of course, was essential for Putin to consolidate his power.

Medvedev faces a very similar situation as Putin did in his first two years – a small cadre of individuals who have managed to spread their tentacles throughout Russia’s political and economic heights (that’s you Igor Sechin!). Their power, though, is weak to the extent that it depends upon the cooperation of the bureacracy. So, what Medvedev is going to do is start at the bottom, and move his way up the bureacracy and replacing all the mid-level managers along the way. Only then will he be able to challenge the ‘elite’ – siloviki et al.

A part of me hopes that Medvedev is actually serious about his anti-corruption plan, and that its likely role in his consolidation of power is coincidental to the broader goal. I could even imagine a scenario where, due to the financial crisis, the Russian population takes warmly to an anti-corruption zachistka program. This might enable Medevedev to generate some genuine popular support, which is at least worth something there.

The one unresolved question lurking in the background is PUTIN! Isn’t he supposed to be returning to to the Presidency soon, or rewriting the Constitution in favor of the PM’s office? Wasn’t Medvedev supposed to resign….? Let’s review – since coming into office, Russia has been in its first foreign war since independence, the American money machine broke, every foreign investor whose capital is not bolted to the ground has left Russia, and the price of oil and the ruble are making everyone say ‘1998.’ So let’s just agree, if Medvedev was planning on resigning to allow Putin’s triumphant return, he would have left by now. So, what about Putin?

I think Putin will slowly drift into the background until one day we will notice he is gone. There will not be some cataclysmic clash between Medvedev and Putin, no arrests of one or the other. Why? Because Putin planned it this way. It might even have started back in 2007, in the aftermath of the Tri Kita scandal, when Viktor Cherkesov – head of the Anti-Narcotics Service – wrote an open letter in Kommersant to other siloviki urging them to not break out into open warfare amongst one another. The article probably only confirmed what Putin already knew – that if a silovik replaces him either (a) the country will fall apart and/or (b) he will end up as collateral damage. So Putin knew he had to go with Medvedev. (Ironically, Nikolai Vinnichenko, Medvedev’s envoy to the Urals District, was the head of the FBS when Medvedev appointed him to his current post. Further, news reports claim that Vinnichenko serves as a link between Medvedev and Cherkesov, as Vinnichenko worked with Cherkesov in 2001-03).