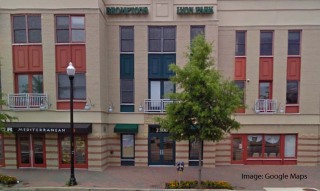 When Pres. Obama treated Pres. Medvedev to burgers at Ray’s Hellburger last week, I thought he was just giving Dima a taste of the D.C. area’s best fast food experience.  But maybe, he was testing his Russian counterpart, by bringing him within a mile of the scene of a massive Russian government-backed crime.  See, Ray’s is just down the road from another Arlington business – Travel All Russia LLC – a tourist agency that organizes trips to Russia (apparently pretty good ones by the looks of the website – see Twitter feed here).  The company also owns RussianTrains.com, which sells train tickets to Americans who are too intimidated or linguistically challenged to master the Russian ticket kassa.  Travel All Russia is housed on the second floor of one of those 1/10th strip mall complexes plopped in the middle of nowhere (see picture above).

What is the significance of Travel All Russia?  Well, it is the employer of Mikhail Semenko, who seems to be one of 11 “deep cover” Russian spies arrested yesterday in one of the most spectacular espionage busts ever pulled off by U.S. law enforcement.  Semenko appears to have grown up in eastern Russia, and got his undergraduate degree from Amur State University in Blagoveshchensk.  Semenko is a China specialist, and received a degree from Harbin Institute of Technology; he blogs about China here.  That this is the correct Semenko is corroborated by page 14 of the criminal complaint filed in the Southern District of NY against Semenko and Anna Chapman, where he mentions being in Harbin during 2004 to a federal agent posing as a Russian official (Semenko graduated from the Harbin Institute of Technology in 2004).  The other Russian agent implicated in relation to Semenko is Anna Chapman, who was arrested in Manhattan yesterday (the LinkedIn profile pic strongly resembles the courtroom sketch – see left – confirmed – NY Post has PG-13 pics).  Chapman is the founder of DomDot.ru (Twitter feed here), a Russian-language real estate search engine, and is an alum of the Peoples’ Friendship University of Russia; Chapman has a background in finance.

In addition to Semenko and Chapman, nine other individuals have been implicated in the espionage ring so far, with charges against eight filed in a separate complaint yesterday as well (one alleged spy – Christopher R. Metsos – is still at large).

According to the U.S. Attorney’s office in the Southern District of NY, the espionage ring was run by Russia’s CIA-equivalent, Foreign Intelligence Service (SVR – Служба Внешней Разведки).  The defendants all belonged to a group dubbed “illegals” by SVR.  According to the U.S. Attorney’s complaint, SVR illegals are “agents who assume false identities, and who are living in the United States on long-term, deep-cover assignments.”  These agents generally receive extensive SVR training before arriving in the U.S., in areas such as foreign languages, agent-to-agent communications, short-wave radio operation and invisible writing[!!], the use of codes and ciphers, the creation and use of a cover profession, counter-surveillance measures, and avoidance of detection.

After training is complete, newly-minted illegals are given new, false identities, referred to as an agent’s “legend” (легенда??).  The overarching goal of this program: for the agents to become sufficiently “Americanized” such that they can gather information about the United States for Russia, and can successfully recruit sources who are in, or are able to infiltrate, United States policy-making circles.  In an encrypted 2009 message sent to two of the alleged illegals from SVR HQ – known as the “Center” – the SVR spelled out the mission in typically Russian, ham-fisted language:

You were sent to USA for long-term service trip.  Your education, bank accounts, car, house, etc. – all these serve one goal: fulfill your main mission, i.e., to search and develop ties in policymaking circles in US and send intels [intelligence reports] to C[enter].

If this all seems a bit ridiculous to you, do not despair – spy games always are.  In response, the Russian Foreign Ministry simply stated that the evidence contained in the complaints looks “contradictory.”  Of course – this could mean any number of things, including that it is contradictory for the U.S. to prosecute Russians for engaging in the same activities as U.S. agents – the 2009 national intelligence budget is $50 billion after all.  Still, I can’t imagine how similarly-situated U.S. spies would be treated by the siloviki, who would probably give away an oil company in exchange for such a bust.

Still, the motives and reasoning behind the “illegals” program are far from clear, though nuclear secrets are a perennial favorite.  I wouldn’t hold your breath waiting for an explanation (though in-court testimony may provide the next best thing).  Instead, I recommend reading Malcolm Gladwell’s review of the book Operation Mincemeat in New Yorker, where he discusses the inherent “contradictions” of spying.  In this context, Gladwell’s piece raises the question of how the SVR planned on interpreting the “intels” sent back to the “Center.”  Gladwell quotes a 1956 play, Romanoff and Juliet, which is appropriate here:

Update (6/29)
The final Russian spy identified by federal investigators – Robert Christopher Metsos – has reportedly been arrested in Cyprus. The Cypriot authorities issued a statement on the arrest, and Metsos posted bail after surrendering his travel documents (how is an international spy not a flight risk?).  Cypriot authorities have indicated that they will honor any extradition request for Metsos from U.S. counterparts.  Metsos was allegedly the “organizer” of the various illegals, and had flown to the U.S. in order to pay the embedded agents.