I have been sitting on this story for a while, waiting to see if anything actually happens and now it appears that it will amount to something – so here goes.  A few months ago, Russian construction entrepreneur and minigarch Valery Morozov started issuing public statements to Russian and UK media outlets, stating that a high-ranking Kremlin official had extorted $6.3 million in bribes from him.  The bribes were demanded in exchange for a lucrative construction contract in Sochi for the 2014 Winter Olympics.

Morozov’s claims can be summarized as such: in 2005, his firm designed a “special presidential zone” in the Kremlin Palace.  Everything we

nt well, except the Kremlin didn’t pay Morozov’s firm.  Morozov said he planned on going to the prosecutor’s office until “they” recommended that he wait for another contract in which his damages would be restored.  Fast forward to 2009, when Morozov’s (74% ownership) company – OAO “Moskonversprom” (ОАО “Москонверспром”) – won a tender to to build the “Primorskiy” health spa in Sochi, a 700-room luxury residential complex on the Black Sea, which will house state officials during the 2014 Winter Olympics.  An official in the Presidential Administration – Vladimir Leshchevsky, Deputy Head of the Office of Capital Construction – was on vacation during the tender and was furious to learn that Morozov’s company had won upon his return.  Leshchevsky approached Morozov and allegedly said, “Of course you know that I was against the tender being given to your company…I support ‘Putivi’ [Путиви].”  Morozov cited rumors that Putivi – a Yugoslav company – was controlled by Leshchevsky and his wife (note: I find nothing on Putivi in the gov tender database).  Leshchevsky at first recommended giving the contract to Putivi and making Mosokonversprom a subcontractor, to which Morozov refused.  Leshchevsky finally gave in, but only on the condition that Morozov pay a 12% kickback on the total value of the project (i.e., 12% of 1.5 billion RUR or $49.25 million = $6 million).  But  of course – there were problems, including the imposition of subcontractors from the former Yugoslavia affiliated with Leshchevsky and another official, Sergei Smirnov.

Morozov filed a complaint with investigators at the Economic Security Department of the Interior Ministry.  The investigators even set up a sting operation where Morozov wore a wire and paid Leshchevsky his kickback, but then informed Morozov the next day that they would not pursue his case and that the evidence had gone missing.  So Morozov – like many a -garch before him – Morozov fled to the UK and unleashed the dogs.  Leshchevsky immediately responded with a statement accusing Morozov, Kommersant, and Sunday Times of slander.  The Prosecutor’s General office shortly announced it would initiate an inquiry, but I got the feeling that this would be a Daimler-style inquiry with no results.

Apparently, I was wrong – on July 20th, Pres. Medvedev publicly ordered Prosecutor General Yury Chaika to investigate the Morozov affair – after the Prosecutor General had announced its investigation.  How publicly did Medvedev do this?  He sent his handwritten order to Novaya Gazeta (pictured right), which had publis 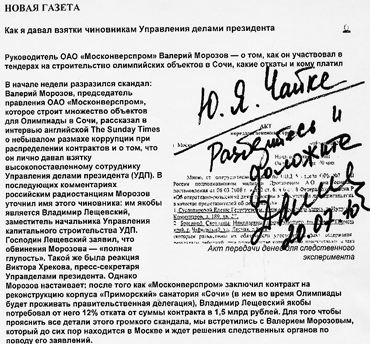 hed the story with Morozov’s most detailed allegations.  Indeed, Medvedev wrote the order on a printout of the very story from Novaya Gazeta! Medvedev’s order to Chaika: “Investigate and report.”  Three weeks later, Russian media reported that Leshchevsky would be charged under Article 290 of the Russian Criminal Code (“Receipt of a Bribe”).

What’s the takeaway of all this?  Here are, in my humble opinion, the salient points: