People will look back on this day as a major turning point in Medvedev’s presidency.  As I wrote back in May, “Simply put, guys like [Luzhkov] need to go, or Medvedev will run the risk of looking weak and naive.”  Today, Pres. 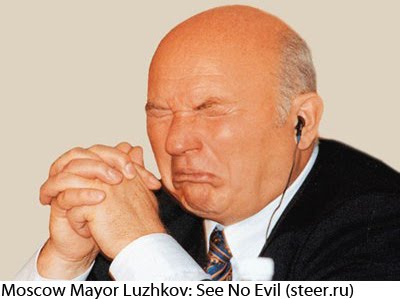 Medvedev claimed his first major scalp in the form of Moscow Mayor Yury Luzhkov, the consummate political survivor with a machine that would make a Daley blush.  I can already hear the analysts working to explain how this, once again, proves that Medvedev actually has no power and that Putin is returning to the presidency in 2012.  I will say what I’ve always said – Putin is not coming back and today we are witnessing the best proof so far.  A few facts I think are worth bearing in mind:

For the definitive background on Luzhkov, I recommend the chapter bearing his name in David Hoffman’s The Oligarchs, available for free here on Google Books.

5 Responses to Medvedev Fires Luzhkov, Turns Corner in His Presidency