Tipping Points – Handicapping the Chances of an ‘Arab Spring’ in Russia 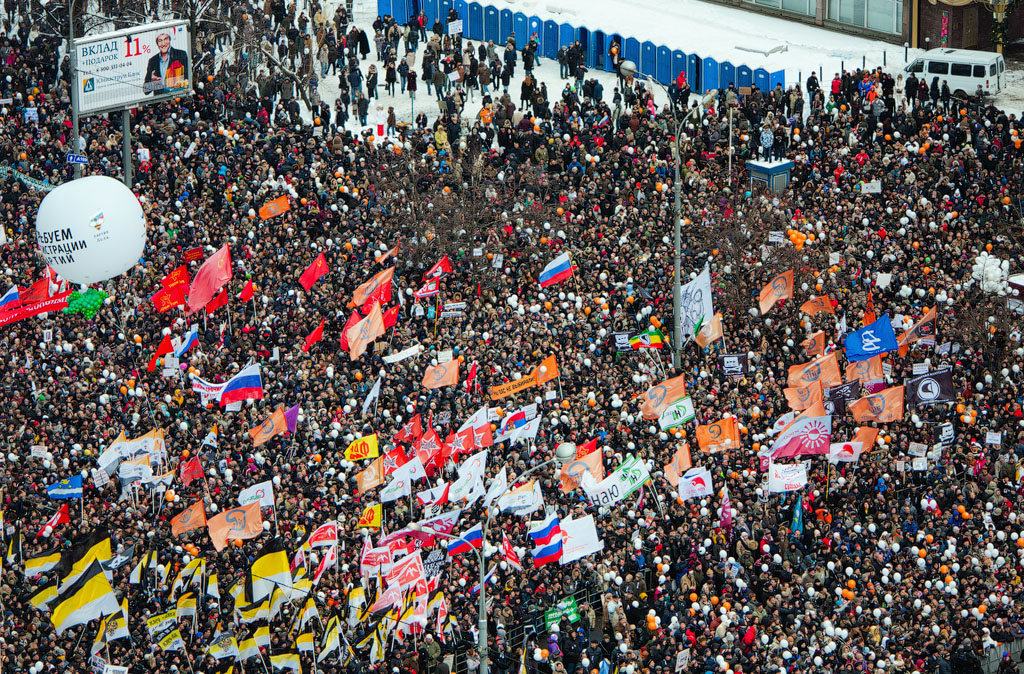 Who are the Protesters?

VTSIOM recently published a survey of the protesters, conducted at the rally at Sakharov Prospekt on Dec. 24. The survey results confirmed other reports that the protesters are mainly drawn from educated, urbanized elites, prompting the name, “revolution of the satisfied.” The survey found that the typical protest-goer is a Russian man under 45 with a high level of education, and middle class income, who heard about the protest on the internet. Interestingly, although 27 percent of those surveyed reporting voting for Yabloko, 33 percent voted for ‘systemic opposition’ parties LDPR or the Communist Party.  A strong plurality of protesters went to Sakharov Prospekt mainly because of the Duma election results. And even though being against Putin was not one of the leading reasons for people attending, the slogan “down with Putin” (долой Путина) was the second most popular, after “For free/fair elections” (За честные выборы).

Tipping Point? Even Feodor I Ruled Russia for 14 Years

As I argued in this previous post, increasing disappointment among the Russian populace is an inherent feature of the system Putin created. That said, these initial protests share more in common with the 2009-10 Iran protests than they do with the 2011 Egyptian revolution, both in terms of the makeup of the protesters and the nature of the complaints. Unlike Egypt, Russia’s protesters are not drawn from all ranks of society and all regions of the country. While intelligentsia are great for speeches and pamphlets, you need the sans-culottes to actually get the work done. Also unlike Egypt, Russia does not have a deeply-rooted opposition ready to form a cohesive party that could arguably represent a plurality of the country (see Muslim Brotherhood). Even the Iranian protesters had Mousavi as the victim of Ahmedinejad/clerical perfidy. Russians only have Just Russia, the Liberal-Democrats, and the Communists (nobody is arguing Yabloko would get into the Duma in a free election). Thus, Russian protesters are mad generally at dirty elections, but have no organizational lever for channeling that energy or claiming victimhood. For lack of a better term, Russian protesters lack agency. This is why, much to the State Department’s chagrin, we cannot expect a “Color Revolution” in Russia – seriously, who would take over? And this is before considering the fact that a slim majority of Russians do not support the protesters (although notably an emerging majority of Russians do not approve of Putin).

Most important (in my humble opinion) is that the Russian authorities are displaying the wisdom of having been in power for quite a long time, but not the arrogance of being in power for way too long. Remember that the turning point in all of the Arab Spring countries was the overreaction of the authorities against the protesters – and the utter befuddlement amongst Arab dictators that ordinary people do not like them. While Mubarak’s “tipping point” may have been unleashing goons mounted on camels into central Cairo, the Russian authorities have been noticeably restrained in their treatment of protesters since the first protest immediately after the election results were announced. Even now, most of the ‘crackdown’ forecasts are intramural affairs, with talk of a possible consolidation of core Putinists and expelling of all others. Without a violent overreaction by Russian authorities, the opposition is not provided a ‘flash in the pan’ moment that totally delegitimizes the regime’s right to continued existence, which can then be posted and shared ad infinitum on the interwebs.

“Russia is the only country where no matter what you say about it, it is probably true”

That all said, there is a sense that Russia has changed, and is changing, for good right before our very eyes. Of course, a lot of this is blown out of proportion by journalists living in the moment – Jack Reed types who can be forgiven. But there is some truth to it. Another relevant point is that the last two previous Russian upheavals – 1917 and 1989 – were largely driven by upper-class intellectuals, much like the current protests. Still, the Bolsheviks were to revolution what Henry Ford was to mass production. And Alexei Navalny seems like a highly intelligent guy, but he’s no Vladimir Lenin. That leaves 1989, which these protests are beginning to look more and more like, and will fan the flames of opposition hopes. In 1989, however, the authorities basically stood down – largely because all the constituent republics declared independence anyway. So we do not see that ‘death of an empire’ dynamic. The question then is whether Putin is the type to just step down from power when faced with nothing more than a large number of angry professionals calling him names? Something tells me he’s not the type.

That leaves one possible scenario, assuming that a bunch of accountants, engineers, and lawyers will not resort to unprovoked acts of violence: a run-off election where Putin loses. For the opposition, obviously the ideal approach would be to force the authorities to allow  their candidates to run, particularly those who missed the filing deadline (i.e., Navalny). But this does not seem likely to happen – the Russian authorities care about the law too much – and the opposition would fracture between ten candidates anyway. Therefore, it seems like the only likely run-off election will be between Putin and Zyuganov. It will be interesting to see: (i) whether Putin’s people will spin a yarn about nationalization the way Yeltsin’s people did in ’96 and (ii) whether these middle/upper class Russians could hold their nose and vote for someone so anachronistic and uncool as Zyuganov and the KPRF. I actually think they could, given how poorly they view Putin and his coterie at the moment. So will Communism come back to Russia via a democratic coalition of nostalgic pensioners and highly-educated professionals? As crazy as it sounds, it seems like a possible outcome. Stay tuned.