There is a now-infamous study on the subject of “decision fatigue,” which looked at decisions by Israeli judges to grant vs. deny parole. The researchers found a wildly skewed trend in the judge’s decisions, but not by criminal history, ethnicity, gender (even rehabilitation programs had less impact). Rather, the prisoners in front of recently-fed judges were granted parole 70 percent of the time, while those in front of hungry judges were granted parole only 10 percent of the time. Plotted on a graph, the chances of parole sink drastically as the previous meal becomes a distant memory (image taken from study): 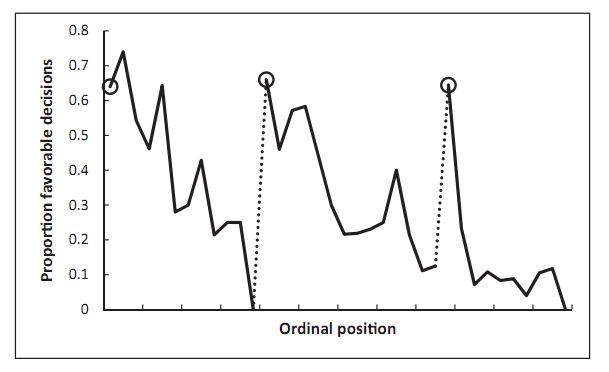 The researchers concluded, among other things, that (i) glucose depletion in the brain increases the effort required to make complex, although binary decisions such as whether to release a criminal into the public; and (ii) as the decision-making process grows more difficult, individuals will tend to prefer the “safe” decision of not making any changes (in this case, denying parole, and keeping the prisoner incarcerated).

Although the situation is not identical, it is possible to discern a similar type of “decision fatigue” that plagues U.S.-Russian relations (Bush ‘freedom agenda’ and Obama ‘reset’ notwithstanding). The reason is that Russia (as USSR) was the U.S.’s primary antagonist for nearly 50 years, resulting in a set of reliable behavioral interactions aimed at forestalling sudden change and uncertainty (raising risk of nuclear war). Now, Russia is not our primary antagonist, but the behaviors remain. Consequently, like the Israeli judges, U.S. and Russian policymakers more often than not opt for no change in the U.S.-Russian relationship, which is convenient because we already know what roles to play after 50 years of practice. This is particularly true with Congress, where pushing a rethink of Russia policy is a low reward / high risk gambit. Still, one would hope that Congress would at least spot the low-hanging fruit – moves that benefit the U.S., respond to Russian concerns, and eliminate Cold War legacies that no longer serve any purpose.

Very soon, Congress will have the opportunity to take action on an issue that, for practical purposes, was irrelevant up until now. With Russia’s accession to the WTO scheduled for August, the deadline for repealing the Jackson-Vanik Amendment is closing fast.

The Jackson-Vanik Amendment was added to the U.S. Trade Act of 1974, with an aim of pressuring the USSR on human rights issues, particularly restrictions on the emigration of Jews from the Soviet Union. The effect of Jackson-Vanik is to deny permanent normal trade relations (PNTR) status to communist countries that restrict emigration. The President, however, may waive the application of Jackson-Vanik on a yearly basis, which has been done for Russia without fail since the Soviet collapse. The WTO, however, requires all member countries extend PNTR to one another, and Congress has permanently lifted the application of Jackson-Vanik from a number of former communist states (e.g., Kyrgyzstan, Georgia, Mongolia, Ukraine, Vietnam).

So, in principle, repealing Jackson-Vanik for Russia should be nothing more than a procedural issue: it has no practical application due to the annual waiver, but now must be lifted to comply with WTO regulations. Unfortunately, the ‘decision fatigue’ over Jackson-Vanik is already showing, with some members of Congress treating Jackson-Vanik like an essential element of U.S.-Russian relations. For example, Sen. Orrin Hatch said, “The president would have Congress pass PNTR and ignore Russia’s rampant corruption, theft of U.S. intellectual property, poor human rights record and adversarial foreign policies for a market that amounts to .05 percent of U.S. exports.” Hatch is a smart guy – he knows Russia gets PNTR every year already, and thus that not repealing Jackson-Vanik will not influence Russian behavior. But the autopilot is already on, and Hatch doesn’t see that the issues he cites would be helped by repealing Jackson-Vanik.

Why Repeal Jackson-Vanik Under the Hatch Criteria:

Most important, Congress needs to remember that if Jackson-Vanik is not lifted, the U.S. will face all of the negative consequences (WTO-related sanctions, nullification of WTO agreement with Russia, higher barriers to entering Russia), and Russia will still be better off than it was before (i.e., in the WTO). In contrast, repealing a Soviet-era relic that has not been used in decades will be no more of a ‘victory’ for Russia than for the U.S. Instead of being seduced by the old rhetoric and patterns, Congress should weigh the consequences, listen to the protest leaders in Russia, and repeal Jackson-Vanik this session.