Parkinson’s Law is a principle governing the natural expansion of bureaucracies, famously articulated in a 1955 essay in the Economist. Under Parkinson’s Law, a government bureaucracy – and, arguably, the administrative staff of some large modern corporations – will naturally grow, irrespective of any change in actual work to be done by said bureaucracy. The reason is boils down to human nature: an official with an excessive – either real or perceived – workload can either (i) split his work with another official of equal rank, (ii) retire early, or (iii) hire subordinates. As the Economist essay explains, variant (i) is unlikely because it elevates a rival for promotion, and variant (ii) is unlikely because it means foregoing retirement benefits, which means variant (iii) is the most rational and common choice for the official. The process replicates itself on down the ranks. But the solution proves to be worse than the problem. The shuffling of a task through multiple layers requires communication and oversight, not to mention the social network element of adding more individuals to a process (e.g., personality conflicts, personal drama). Thus, the official ends up with just as much – likely more – work than he had in the first place. Hence, bureaucracy.

The Economist essay – using data from the British Civil Service – gives some examples, and finds that the “all the researches so far completed point to an average increase of about 5¾ per cent per year.” I was curious whether the Russian bureaucracy has followed Parkinson’s Law, and indeed it has. From 1999-2011, the total number of Russian bureaucrats has grown from 485,566 to 827,503, an increase of 70 percent, or an average increase of 5.8 percent per year. 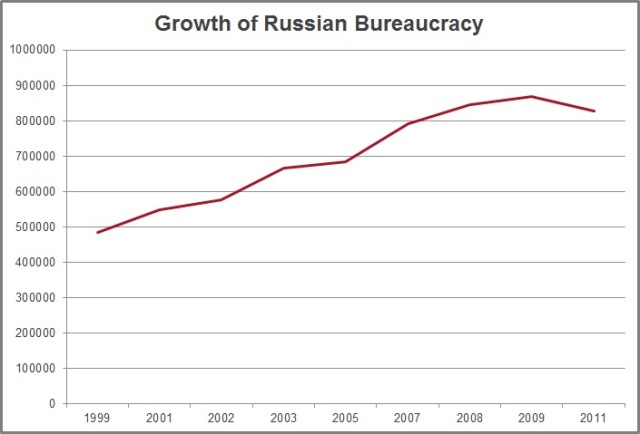 The numbers have fallen a bit from their peak in 2009, which is to be expected given the global financial crisis. Commentary at the time the 2009 numbers were released noted that during the Soviet era, the bureaucracy amounted to 0.1 of the total population, whereas now it is closer to 2 percent (note that these numbers include a broader category of people).