Will the history books view the shooting down of MH17 as a similarly crystallizing event like the assassination of Franz Ferdinand nearly 100 years before? Maybe (probably depends on whose books you will read). In any case, it is difficult to overestimate the significance of that apparently accidental event, which arguably convinced the EU (read: Germany) to adopt stricter sanctions against Russia.   [Sidebar: many have compared the downing of MH17 to that of Iran Air Flight 655 in 1988. I agree, it seems similar. The difference is that where Putin has tried to pin the blame on the Ukrainians for ‘creating the conditions’ that led to the tragedy, Pres. Reagan immediately repudiated Pentagon claims that the US Navy did not shoot the Iranian airliner down].

The key to the new sanctions: freezing major Russian companies out of the global, dollar-based financial system (the ‘matrix‘ I wrote about earlier). Strangely, statements from Russian officials have vacillated from claiming that the sanctions have no impact to admitting their devastating consequences. The news yesterday, however, seemed to corroborate the latter group: Rosneft is requesting $42 billion in emergency funding from the Russian government to offset the effects of the sanctions. To put this figure in perspective, here are some fun statistics about what $42 billion represents:

At the same time, oil prices have remained low despite the conflicts in Ukraine, Gaza, and Iraq, thereby limiting the financial levers available to Moscow. 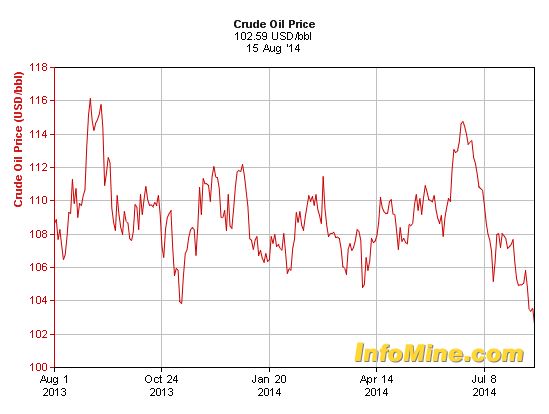 And this is only a few weeks after the new sanctions went into effect – it will get worse (perhaps far worse) before it gets better. Indeed, it will arguably get worse for both Russia and the West.

But the sanctions are working, right? Not really, if the aim is to influence Russian policy. Indeed, an internal Sberbank note on the sanctions comes to the following conclusions:

1.       We can be fairly certain that sanctions will not succeed in compelling Russia to reverse course as Russia is a textbook case of a country that will not respond to sanctions. It has a strong leadership with popular support, already poor relations with the West, an alternative supporter in China, and a high perceived cost to amend its policies.

2.       We should expect sanctions to go on until the situation in Ukraine is resolved through victory or negotiation.

3.       It may be that sanctions are just for domestic consumption in the West, and this is clearly what the market hoped at the start.  However, there is a danger that sanctions are ratcheted up until they really do cause economic damage in a (probably futile) attempt to make the costs outweigh the benefits.

4.       The West can’t afford to stop importing Russian energy, and Russia can import most goods from Asia, so the key sanctions levers that the West has are high tech exports and financial markets.  As we have noted many times, Russia is highly unusual to have such large and integrated financial markets and yet to defy its providers of capital.

5.       We reiterate our longstanding view that the option value of Russian shares lies at around 1,000 on the RTS, that the oil sector is the safest place to be within the market, and that the banks are the area most exposed to sanctions.

6.       The main hope for the next market bounce centres on a new attempt to negotiate a comprehensive solution.

Thus, the sanctions are unlikely to influence the behavior of either side. But missing from this analysis is the broader, long-term consequences of Russia’s decoupling from the international system. At some point, it will not be so easy to just ‘flip the switch’ and go back to how things were circa February 2014. If the sanctions have the effect of freezing Russia out from access to international finance and investment – or at least dramatically increases the costs of accessing such finance/investment – then this will turn out to have been a bad month for Putin indeed. The only way for Putin to avoid such a scenario is to blink first or, given his perfected media manipulation machine, declare victory and leave Ukraine alone (a more likely scenario in the event oil prices suffer further declines). In other words, Russia could go back to Feb. 2014 or on the road to N. Korea, and it’s all up to one highly unpredictable man. Sounds like a paradise for foreign investment.