For Russians hoping to enjoy a Big Mac, America’s Favorite Fries, and wash down their meal with a Jack Daniels, the news is not good. In a thinly-veiled effort to retaliate against the United States for its Ukraine-related sanctions, Russian regulators are now targeting iconic American brands. This goes beyond the transparent, retaliatory sanctions Russia already adopted against imports of certain agricultural products. Instead, the most recent measures fall into the ‘asymmetrical’ variety, of which Russia is so fond. 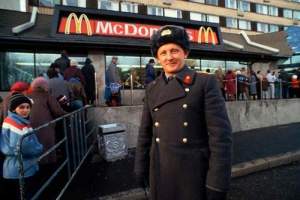 Here’s what has been done so far:

Western companies should expect such ‘asymmetric’ efforts by the Russian authorities to increase. Indeed, you can expect a number of ‘copycat’ inspections after the Moscow branches of regulators like Rospotrebnadzor take action, such as in the McDonald’s case. Obviously, the targeting strategy is aimed at iconic American brands for which Russia represents an important market. Russia has long been a growing source of revenue for McDonald’s, and it has escalated its expansion into that country, most recently with the first master franchise agreement with Rosinter. Similarly, Beam has been making inroads into Russia, where whiskey consumption has been growing exponentially among traditional vodka drinkers.

The whole idea behind this approach to hurting U.S. companies is not only to retaliate for the sanctions, but also to promote ideas that U.S. products are tainted or defective in the public mind.

So who will be next on Russia’s list? Here are some guesses: